The BBC recently described Stockholm as a “truly modern metropolis filled with historic architecture and a reputation for tolerance”. So what’s it like living in Stockholm in a bit more detail.

I am originally from a small town in the north of the UK, and I’ve lived in Stockholm twice. I love it here and think that Stockholm is a great place for anyone looking to get involved with a growing European capital will a great history and a great future. After speaking with hundreds of expats here, it can be a hard place to get started in, but once you settle the culture, people, and opportunities here are great.

I’ll break this guide down into a few subsections to make it easier to flick through and for you to get an idea of that living Stockholm can offer.

Stockholm is a relatively small city compared to others in Europe and has just under 1 million people living in the center and surrounding areas.

Stockholm is made up of a number of islands and sits in the middle of a fantastic archipelago of thousands of islands. In the city, however, Stockholm is spread across 5/6 main islands:

Then there are the surrounding areas. 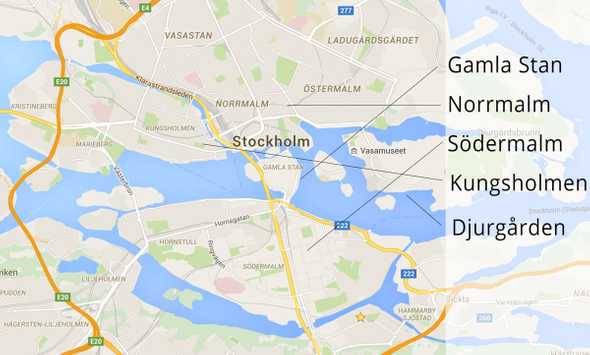 Gamla Stan is the old town and the birthplace of Stockholm. It’s a very popular tourist destination and has a great Christmas Market.

Södermalm is the art and hipster center of Stockholm, with lots of boutique stores and cafes.

Norrmalm is where Stockholm City lies, as well as the affluent Östermalmn area.

Kungsholmen is a smaller island with lots of apartments and stores, and also has the highest number of single people in the world.

Stockholm and Sweden, in general, is an expensive place to live IF you are not from their area. Everything is relative and therefore if you have a Stockholm wage, things here are more agreeable.

There are places and items here that are still, in my opinion, overpriced, but it is what it is.

Sweden has a great working culture with great benefits and employee satisfaction. Finding jobs in Sweden is fairly easy with a number of great websites (we’ve written about finding a job in Stockholm before).

However, if you are looking for an English-speaking or non-Swedish speaking job, things can be a little harder.

Finding an apartment in Stockholm is tough. The market is crowded and competition is high. Most people rent and the lucky ones buy their own place.

Costs are high and selection is often low, especially in the inner city areas. That being said, the quality is higher than you will find in other capitals in Europe.

We’ve gone into more detail about finding an apartment in Stockholm previously. The best strategy is to start looking on websites like Blocket or Samtrygg to find apartments.

Meeting locals in Stockholm can be tricky but well worth the effort. There are plenty of stories about how Swedes are notoriously difficult to get to know (and I’ve read somewhere that Sweden was recently voted the hardest place in the world to make friends!), but trying to grab a beer with some work friends or meeting some locals at a pub is not that hard.

I’ve found if you learn to settle in, speak Swedish, help out, and integrate well, you will have no problem meeting the locals here.

Stockholm also has a good expat community. There are plenty of meetup groups and events like this one, and Sweden attracts people from all over the world. USA, UK, Australia, France, Germany, Netherlands, Bulgaria; you name it.

The weather is Stockholm is great during the summer, with temperatures reaching 30 degrees. But there is no hiding from the fact that the winters are cold and long. There is a Swedish saying “there is no such thing as bad weather, only bad clothes” and so it’s easy to cope with. However, the winter brings with it a new type of city, with snow-covered streets and a really refreshing feel. 7am in minus 17 is actually one of my favourite parts of living in Stockholm.

I think the worst part of the winter is the darkness, where the sun will rise around 9am and go down around 3pm. This makes the evenings cost but the morning difficult, so I suggest you buy one of these.

Summer is a big deal here, and many Swedes take a good 5-6 weeks holiday over the summer months (we’ve got a full breakdown on the public holidays in Sweden here). Swimming in the rivers and lakes around Stockholm is very common.

People in Sweden and especially Stockholm have a very active lifestyle throughout the year. From running and hitting the gym, to cross-country skiing, ice skating, and hiking in the forests, Swedes are very proud of their landscape and their freedom to explore the countryside.

With some estimates of Stockholm being made up of one-third water and one-third green space, Stockholmers and Swedes are also very environmentally focused and take recycling very seriously.

Alcohol here is controlled by the government in one store called Systembolaget. Most expats complain about this system but Systembolaget does have a great selection of beers and wines and their staff know pretty much everything about what wine you will need for a dinner.

Education and healthcare standards in Stockholm and Sweden are very high, with great schools and an affordable and well-maintained healthcare system. Most people need to pay to go to the doctor here (c.200 SEK / visit = $23) but you only pay for the first 1000 SEK ($116) and the rest is free. You need to pay for prescriptions as well.

So that’s a general overview of what it’s like to live in Stockholm. I hope these pointers have been helpful and give you an idea of what to expect when moving here. Stockholm and Sweden are mostly the same in terms of what you can expect, but there will be some things that vary from city to city in Sweden.